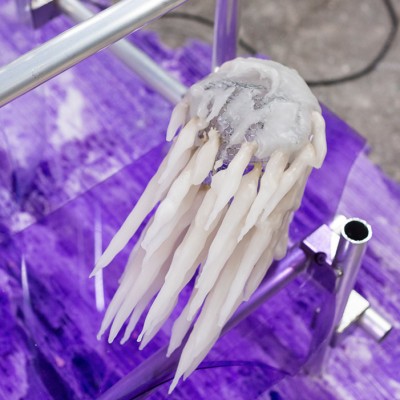 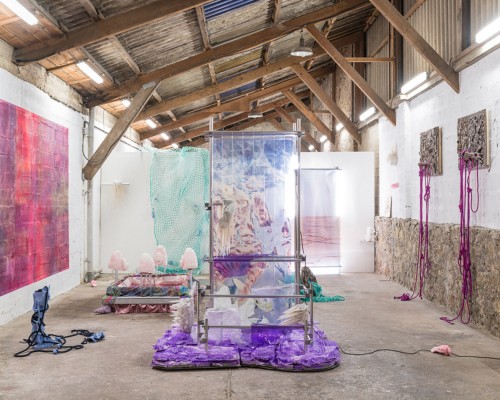 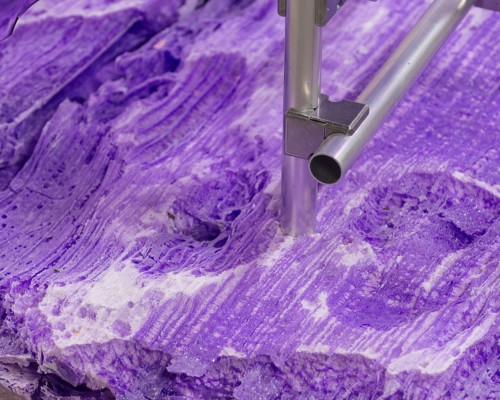 Synopsis
If the flamingo has adapted to the territory in which it lives, it is not the same for man. The animal has modified the opening of its beak, among other things, to draw these resources from mud or salt lakes.
In the exhibition, aluminium structures architectures a dystopian vision where man has finally mutated with his environment.
Steel, aluminium, wax, material in transformation but also frozen in the moment. It is a statement made in the moment, but also an invitation. The structures represent a door, an island and a window. They also show a hypothetical future.

Extract from the text by Septembre Tiberghien

Act I: Where languages intermingle

Imagine a garage, with cinder block walls sometimes leaving some brick remains exposed. This space is about fifteen meters long and about five meters wide. It is two-thirds divided by two picture rails with an opening in the middle to access the rear of the building. Despite its Spartan appearance, it is well equipped for a workshop.
The artists divided up the space here by delimiting workstations, determined by a very empirical functionalism. Each one seeks his or her place within the group and in relation to his or her own practice, relocated in a third place permeable to the outside, since the door, once opened, is like a large theatre curtain, revealing to passers-by the activity of the artists and vice versa.

As the stage begins, the main discussion is about the adaptability of the flamingo, whose particularity is to filter the mud with its beak to draw its food from it. It is the food, which varies according to the bird's environment, that gives its plumage its hue, which ranges from salmon to light pink. By analogy, the artists agree to let themselves be impregnated by the context of Boulonnais, first of all by these local rites and myths, then by the provoked or chance encounters with the inhabitants, in order to build up a repertoire of motifs, materials and gestures that will momentarily influence their collective creative process.
But then the tyranny of individualism resurfaces and points to the limits of the method: it is not enough to put together to make common! How can we make sure we are understood when we do not speak the same language? Aware of the stakes and difficulties of the exercise, artists decide to remain faithful to their desires and to allow themselves to drift, temporary misfortunes and why not failure.

Sarah takes centre stage, with a metal structure that serves both as a pedestal for sculptures and the architecture of a set. The staircase marked by sharp edges seems to have been designed to cross an imaginary threshold.

Its function is deliberately ambiguous: both door and window, its frame refers to the very definition of Renaissance painting, which is a window open to the world. To this environment are added objects encapsulated in paraffin, forming curious stalactites, which appear in the continuity of a deserted and dehumanized landscape.

Evoking the dystopian short stories of the British author J.G. Ballard, this staging produces an impression of disturbing strangeness. Through an interplay of transparency and opacity (wax-coated wire mesh, film) the artist holds up a mirror to a society that is losing its bearings.